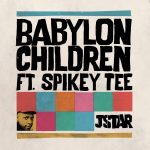 I lived in West London almost all my life, and it won’t have gone unnoticed across the world the terrible tragedy that occurred in that area at Grenfell Tower in June 2017.

One of my favourite tracks growing up, and becoming immersed in reggae, was the Aswad live version of “African Children” performed at Meanwhile Gardens, Westbourne Park in 1983 from their “Live and Direct” album as part of eth Notting Hlil Carnival. It also has a tremendous double tempo section with Drummie Zeb, and a big call out to all the local London area posse’s, with Ladbroke Grove getting the biggest cheer.

A while ago I wrote an instrumental, and singer Spikey Tee was staying at my house, and I heard him humming the introduction to “African Children” over the music. Though I had intended to write a new song, it seemed great to pay homage to the Aswad track, especially whil having such a great singer staying with me! Spikey also write to Brinsley Forde to see what he thought of our rough version.

So we ended up with “Babylon Children” – a cover of Aswad’s powerful “African Children” track. This updated version is lyrically as politically relevant today as it was when originally released 34 years ago in highlighting poverty, housing conditions and inequality.
In light of the Grenfell Tower incident I thought the track was appropriate to support this cause, as it occurred very close to the area I spent most of my life in and many of my friends have been affected personally and lost family members.
Spikey Tee’s end vocal coda of “Chant down babylon and help turn the page” adds the importance of making your voice heard in a society that so often sweeps aside the voices of the many in favour of the few
All proceeds of the single /EP release will raise money for those affected by the Grenfell Tower Fire. buy the single and remixes

← TACK>>HEAD / Jstar official remixes
I have a new record out. WARRIOR EP. →