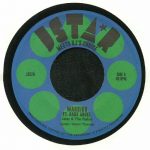 Big thanks to all the support we’ve had for this release – the guys at Monkeyboxing, 45Live , and all at you buyers at Juno who already made it number 1 on the reggae/ dancehall charts

Main vocal on the A-side comes courtesy of Dark Angel aka Mowty Mahlyka, who is well heartstrong, uncompromising and militant, B-side has my dope dub edit (no vocals so good for MC’s too). One of my favourite DnB/ Jungle producers, FLeCK comes in with a junglist rub on the digital, and Shanghai’s MC Jado singjays and impressive track that would put alot of European reggae singers to shame!

It was a bit of a rushed job as it had to coincide with my tour of China – the digital release features MC Jado singing about the trouble he has with Shanghai girls… but the record pressing plant had lost our ‘stampers’ (what we use to press each little record you receive), so we missed out on Record Store Day and proper ‘promo’ campaign.

Not that i really ever gave a toss about all that at the beginning of Jstar, it was quite the opposite – make the record and chuck it out there and get on with the next one!

So go and have a listen!